Amidst the crowds and chaos, window and store displays provide a rare joy for holiday shoppers, especially those with kids in tow. In fact, several city department and luxury stores create such magical holiday window displays that they are worthy of their own trip. If you’re able to visit one of these cities in December, be sure to check out their beautifully decorated stores. 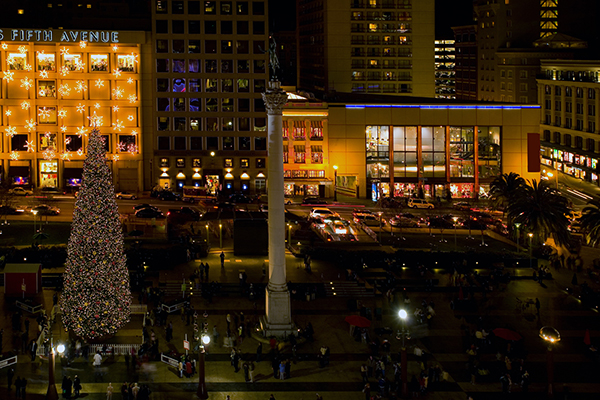 San Francisco
If you’re in San Francisco, head straight to Union Square for the best in holiday store window displays, including Neiman Marcus, Gucci America, Apple and, once again, Macy’s, which has a very special display with adoptable cats and dogs in an effort to help the San Francisco SPCA. Be careful — the animals are hard to resist! The window displays have helped thousands of animals find homes.

Chicago
Chicago‘s famed Magnificent Mile is a shopper’s heaven and a Christmas window display treat. But if you really want to see a show, visit State Street, particularly Macy’s, which continues New York’s legacy in the Windy City. Formerly Chicago’s renowned Marshall Field’s, Macy’s converts its seven windows along State Street and a window on Randolph Street into full storybooks. Inside, the store features a 45-foot tree decorated with 4,000 themed ornaments and more than 15,000 LED lights.

Toronto
Not to be outdone by its U.S. neighbor, Toronto‘s impressive holiday window displays in the Bloor-Yorkville shopping district are equally worthy of noses upon glass. The Hudson’s Bay Company’s and Holt Renfrew’s Bloor Street windows are much anticipated for their fashion-forward and holiday-themed designs. Other window displays can be found at stores like Hermes, Prada, Burberry and Chanel.

London
London, as a whole, is absolutely charming at the holidays, with Christmas markets, musical events and dazzling lights strewn about the city. And some of the best lights displays — and overall exhibits — can be found at Harrods. In the past, the luxurious department store, located in the neighborhood of Knightsbridge, has presented a massive snowglobe village, replica of the Tower of London and even a life-size alpine ski chalet! When you’re done ogling the store window displays, head inside to enjoy hot cocoa and a pastry at Florian Cafe.