Intrigued by the name of this hotel? Us too. The TUI MAGIC LIFE Waterworld is a beachfront, water park resort in Belek, Turkey. The water park has 11 pools and seven waterslides! In addition to the beach, water park and pools, families will find fantastic kids’ programming, with kids’ clubs for ages 3 to 6 (MAGIC Mini Club); 7 to 12 (MAGIC Kids Club); and 13 to 16 (Teens Time). There are lots of amenities for infants, too, including a Baby Corner with a microwave, bottle warmer, and kettle in Magico, one of the onsite restaurants.

Other offerings at this resort include a fitness center and fitness classes, bicycling, live entertainment, tennis, water sports, and onsite dining. Accommodations include family rooms for two adults and two children. Suites can also accommodate families of four.

If you are BLACK or of colour DO NOT BE AWARE

I decided to return to Turkey following a stay in Marmarise many years ago. Oh what a mistake as I WOULD NEVER RETURN due racism experienced and inequality.

From arrival to leaving, both the Germans and Russians starring excessively at us the whole time, possibly because we were one of a few blacks in the hotel. Even the British displayed ignorant behaviours. I was wondering if they had not seen black people before and tried to ignore the constant stares and enjoy my holiday. Although this was uncomfortable, it became more unbearable throughout our stay due to direct racism experienced as some of the guests would laughing and moving from tables when we sat close to them. The white mentality of being better and ignorance still prevails at a cost of £2,400 at our expense.

Transfer to the hotel was not an issue, but on arrival to the hotel, we were kept waiting. The people on reception could not speak a word of English. Drinks and snacks were on the side but we were not advised that we could have some. After sometime we were told how to get to our room and our luggage arrived after approximately 15 mins. There was one double bed even though I informed prior that I would need two single beds. Fortunately, they were able to set up the sofa into a bed but it was very uncomfortable and dirty.

Room: Generally the shower and room was very spacious and the room was cleaned once a day. On the second day a note was put under our door asking me to come to reception bringing our passports because they thought we had more than 3 people in my room. Implying that I had snuck in another person, how ridiculous. I had requested a single bed in my room on the second day as I did not wish to sleep with my son but they told us that they had seen us on CCTV. When questioned and asked to see the CCTV, they denied this.

Food: There was a few dining areas and generally there was a range of food to eat. However, most of the food provided was for the benefit of the Germans and the Russians.

Drinks: Alcohol drinks were very limited. Just wine, beer and gin for the most part and they call this all-inclusive – WOW. Any other drinks would attract an additional price.

Food service: The waiter would not serve us throughout and I could honestly say that we were served about 6 times for the duration of 2 weeks. I was wondering whether it was self-service until I mentioned concerns to the rep. Most nights we experienced the waiters serving the Russians and Germans on tables surrounding us being very tentative with them all night and no one served us one drink. When I questioned this, I was informed that both Germans and Russians book there every year and that they are secretly tipping when in fact the waiters have been warned against receiving tips but they continue.

Activities: A very impressive range of activities provided onsite but again certain activities were aimed and organised with the Germans and Russians in mind. For example, the TV/Sky had 1 channel in English and the rest in Russian and German. When the big football matches were being shown the preference would be Germany or any other German team V… Or Russia or any other Russian team V… Therefore any English team would not be displayed on the SKY. In the Bar area a specific large screen was displayed, for the Germans playing the German game, which I thought was rather disgusting. They had several opportunities to alternate the showing of English games but instead did not and we had to go 1.5 miles down the road. Furthermore, Octoberfest for the Germans, decorations and games. Where is the inclusivity as I am sure I paid significantly more than them to stay in the same hotel.

Waiters and other workers: Hardly anyone could speak English so it was a battle to communicate simple matters and get a resolution. We had to wait days for assistance to get the TV changed into English and it was on the 12 day that someone was able to attend our room only to receive 3 channels.

Spa: I was asked nearly every day to come to the spa for a Turkish bath/massage, which I had not experienced before. When I took up the offer which was excessively priced (£80), rather than the £25 paid via TUI, I was in shock. I was not asked if I had any conditions which would be a basic requirement before massage. I suffer from back pain and it was evident that they only wanted my money. The women and man on reception were rude and kept talking in their own language when I questioned them. Finally having a Turkish bath I was asked to strip naked but was not told that I could wear my knickers/bra or a swim suit. I felt totally disgusted afterwards having this greasy man wash me, my breast with my private parts exposed. Had I known, I would have not undergone this. Furthermore, no privacy and a couple walking in to see me naked.

Entertainment: On a few nights it was good, especially the acrobatics and the circus. Most nights repetitive entertainment and a need to constantly refer back to the African slavery experience. What does this have to do with Turkey?

Trip: what a rip off. Attended the trip Offroad, jet boat and rafting. We enjoyed the Offroad experience and the jet boat which was great but did not participate in the rafting because we were told to leave our possessions on the bus with no lockers provided. No refund given after a complaint to Bob the representative. He was not helpful at all and I am still waiting for a response. Lots of banta but no real action.
We were ignored the whole time and the organiser spoke in German and Russian the whole time. We had no clue about safety

Overall disgusted and traumatised at the whole experience.

We are a family of four and this hotel has something for everyone. This was our sixth holiday in Belek and it was our second time in Tui Magic Life Waterwordl hotel, first time ever we have chosen the same hotel twice. Reason for that is mainly the great amount of activities and the active teen club. We enjoined yoga, pilates, tennis, football, beach volley and it is great that even the watersports is included in the free programm.

Tasty lunch at Basta Pasta and good variety of food in Magico. We want to thank warmly the waiters Ersin and Aziz in Magico restaurant for their kind service. As well warm thanks to Alp in entertainment team and Ufuk in teen club. You all had a great attitude for your job, all the best for you. 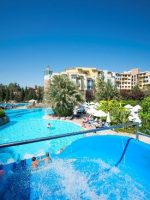 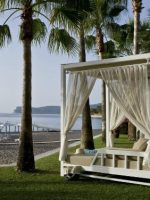