While this year-round inn does not permit children under 6 years old to stay and most of the rooms feature only a king bed, the proximity to town and the nearby ferry to Martha’s Vineyard make it appealing to families. Located in the heart of the harbor town called Woods Hole, families can easily walk to several restaurants, shops and even the Woods Hole Aquarium while staying at the Woods Hole Inn.

There are a few connecting suite guestrooms, which are ideal for family stays. The property has been run as an inn, on and off, since 1887. The current owner took it over in 2008 and conducted massive renovations. What was once an old-school boarding house with 30-plus rooms and hallway bathrooms has been transformed into a quaint and charming 14-room inn with each room now featuring its own private bathroom.

Visitors will find original hardwood floors almost throughout the inn — make sure to stop and read the unique wallpaper lining the stairwell. The owner had old, handwritten registration cards from the inn turned into wallpaper, displaying the inn’s history to its new arrivals.

All of the guestrooms feature a private bathroom, mini-fridge, iPod docking station and DVD player. Many of the rooms feature original hardwood floors and views of the Woods Hole Harbor. Rollaway beds are available for a $15 nightly fee.

Standard King
The majority of the guestrooms feature a king bed with calming colors of blues and neutrals. The private bathrooms also feature a bathtub. A few of the king guestrooms do feature a stand-up shower so if you are in need of a bathtub, definitely request a room with one.

Suites
Two guestrooms (rooms 8 and 9) on the main level feature two queen beds in one room and another queen bed in a connecting room. The rooms are connected by a Jack and Jill bathroom (accessible from two rooms). This suite would be suitable for families and can sleep six people comfortably.

Room 5 is also suitable for a family of four as it features a king bed and separate living room with a queen sleeper sofa. A gas fireplace can also be found in this suite, along with a tub and shower in the bathroom.

King Guestrooms
Three larger, "named" guestrooms, the Nobska, Nomanessett and Penzance guestrooms, feature king beds, an antique claw foot tub, glass rain shower and an excellent views of the harbor. An outdoor deck is featured in Nomanssett and Penzance, as well. These three rooms are best for couples, as they only sleep two people.

My boyfriend and I had an awesome weekend, visiting Wood's Hole and Martha's Vineyard, in large part due to the fantastic experience we had at Wood's Hole Inn. The Inn itself is in a perfect location, right downtown and a steps from restaurants, ferry, bike path, etc. The room, albeit small, was charming and comfortable and had everything we needed. The breakfast was absolutely delish and all the staff were friendly, helpful and accommodating. I would definitely recommend. We will certainly be back!

The Definition of "New England Quaint"

Charming Inn set in an ideal location! We enjoyed 2 nights at the Woods Hole Inn following a promotion from Travel Zoo. Visited in the off season and couldn't have been happier with the visit. Between the delicious breakfast, the proximity to the Shining Sea Bikeway and the Ferry to Martha's Vineyard - there was no shortage of activities to keep us occupied during our long weekend. And, in the event the weather outside prevented us from exploring the charming and beautiful setting of Cape Cod, Woods Hole Inn provided board games and DVD's to keep us occupied. The Staff were incredibly helpful and provided well researched ideas after we requested tips on where to go if we should go to the Vineyard. And I highly recommend taking them up on their bicycle rentals for a trip along the Shining Sea Bikeway! Landfall restaurant across the street, and the Quick Hole tavern offered tasty food and beverage options. I would absolutely stay here again!

Bicycles
Guests are welcome to use the inn's bicycles on a first come, first served basis. Several bike trails surround Woods Hole, making it a great way to explore the town as a family. The Shining Sea Bike Path offers 11 miles of trails along beaches, cranberry bogs and marshes and it starts at the foot of the Woods Hole Inn. The bike paths are mostly flat terrain, too, so any skill level can enjoy a day of bicycling.

Common Spaces
There are several spacious common areas to be found throughout the inn, both indoor and outdoors. Guests will find books and DVDs available to borrow, along with several board games. Rocking chairs line the porch and deck areas outside (on several levels) and cozy couches and fireplaces welcome guests to the indoor spaces.

Beach
There are several beach options only a short drive or bike ride away. Stony Beach (which is actually very sandy) and Nobska Beach are just two nearby options.

Breakfast
A unique breakfast is made from scratch each morning for guests from 8 to 10 a.m. Something different is offered each day, and may include fruit, yogurt, egg dishes, granola, breakfast tacos, quiche, and of course, delicious muffins, breads and pastries. The large open kitchen overlooks a charming sitting area where guests can enjoy the start of their day. There is also an outdoor deck area with tables just off the kitchen.

Coffee and tea are available throughout the day. Guests are also welcome to use the large refrigerator and freezer or the microwave that is located in the kitchen.

All About the Extras
Parking
Valet parking, which is included in the room rate, is available to guests. The parking lot is very tiny and the metered, street parking is limited, so you will want to use the valet parking. In the off-season, self-parking is available.

Wi-Fi
Complimentary Wi-Fi is available throughout the guest rooms and common areas.

Pet Friendly
Pets are welcome at the inn.

The Art of Smart Timing
The Woods Hole Inn is open year-round, but its busiest season is from about April through Labor Day. October and December can also be busy months, as guests visit for the fall and Christmas seasons.

Getting There
Woods Hole Inn is located in the town of Woods Hole on Cape Cod and is about 10 minutes from the town of Falmouth. It is about one hour and 45 minutes to the Logan International Airport in Boston and to Provincetown. It is also about an hour ferry ride to Martha's Vineyard from the Woods Hole Inn.

Getting Around
The harbor town of Woods Hole is easily walkable while staying at Woods Hole Inn. Families will find several restaurants, shops, bike paths, and the Woods Hole Aquarium within walking distance to the inn. A ferry to Martha's Vineyard is also just steps away from the inn. A vehicle is needed to venture outside of town, however. 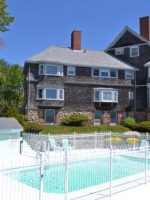 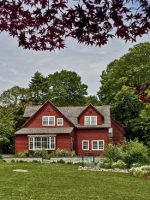 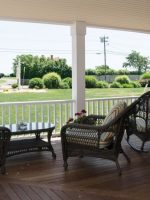 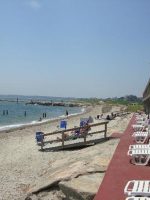 Baileys By The Sea 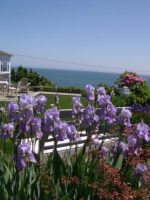 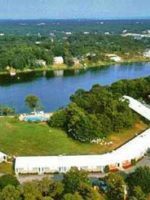