Located near the Virginia Beach Convention Center, this oceanfront, all-suite hotel is situated in the heart of Virginia Beach. The Virginia Beach Sportsplex is also located nearby. After a day at the beach, families can continue the fun at the seasonal outdoor pool. The kids can swim and play while the adults can relax on the lounge chairs on the sundeck. In the evenings, the fire pit is an ideal place to gather. The comfortable and spacious suites feature a private balcony, mini-fridge, microwave, coffee maker, flat screen television and a sleeper sofa. There are also plenty of USB outlets to charge all devices. Complimentary Wi-Fi access can also be found throughout the resort so there is never a concern with staying connected to work, home and school. Families will love to start each morning off right with the free hot breakfast buffet that features items like eggs, waffles, hot and cold cereal, yogurt, fruit and more. Free parking is available.

Staff was wonderful, friendly, and very helpful during out stay, Rooms are in need of renovation in the near future. Breakfast was delicious and plentiful. Parking is a bit tight but we made it work. Employees should have their own smoking section in a different location as the current smoking station is located in front of entrance area.

The Elephant in the room

This hotel has a lot going for it. The oceanfront location right on the boardwalk, very friendly employees, a lovely breakfast room with an ocean view, covered parking. We had booked 10 nights here with the notion of making it our home base as we explored the area. After three nights, we checked out early. There is a huge elephant in the room that people are not talking about in their reviews of this hotel and although it is in no way reflective of the hotel in itself, it does impact a visitor’s experience greatly and I think it needs to be mentioned. There is a large group of homeless who frequent the Virginia Beach boardwalk by day and bunk down in the business doorways by night. These poor people are everywhere you look. The hotel is exterior corridor with a city view on one side. Your city view at night includes seeing these souls sleeping in the doorways of adjacent businesses. When you shop at the nearby Walgreens, you will encounter them. They asked us for food, money, cigarettes daily. As we sat in the mornings on our oceanfront balcony, we watched the homeless pick out boardwalk benches and settle in for the day, many times arguing and fussing at each other. As we (and other tourists) tried to take pictures at the Neptune statue, at the pier, etc, we were verbally harassed or asked for money, cigarettes, food. Entering the hotel from the boardwalk entry, homeless on the grounds of the hotel, you had to step by them to go inside. On our third day, we ate outdoors on a boardwalk bench, watched by a young homeless man. As we threw away our leftovers, he walked to the trash, pulling out and eating our leftovers, drinking the drink we threw away. It was sad. It was stressful. There are signs and small receptacles for donations, requesting that visitors not give money directly to the homeless. The morning of our 4th day, I went to the balcony to sit and look at the ocean. Instead I watched four homeless people fussing and scuffling over the bench directly below (we were on 8th floor). I called down to the office to ask what time the manager came on duty. It wasn’t for another hour or more. The clerk asked if she could help me and I told her I would like to check out early. She asked why and I told her because our encounters with the homeless were just more than we could bear. No comment from her other than yes we could check out early and get a refund for the remainder of our stay. We checked out after the manager had come on duty, but she was not present when we checked out and we received no communication from her regarding our early departure. Bottom line: hotel shows wear, but that is to be expected given its location. The beach is rough on buildings. Breakfast was just fine, attendants were very nice. Covered parking ok. We didn’t feel unsafe per se, as you have to go through the lobby to use the elevators that take you to the exterior corridors. I would not recommend it simply because of the homeless situation. I looked back over reviews of this hotel and only saw the homeless situation mentioned a few times. It is a hard thing to talk about but it needs to be said. I feel like maybe the hotel chooses the “pretend this isn’t happening” tactic on the homeless issue, but believe me, it is happening and it is a sad thing. One last thing: I am in no way trying to minimalize or downplay the plight of these people or seem insensitive to it. It was eye opening for us and made us realize that although homelessness isn’t an issue in our town, there are most certainly ways we can contribute to ensure it doesn’t become one. 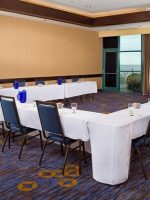 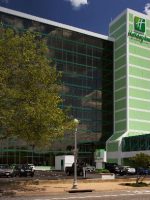 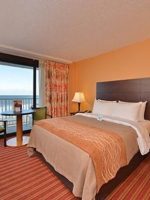 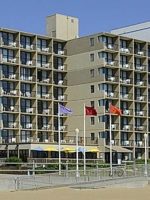 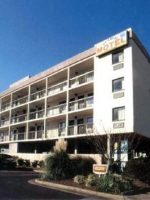 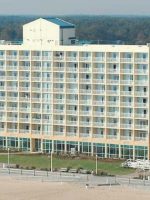 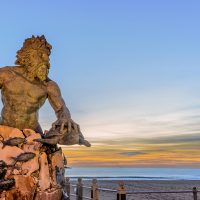