As guests cross a bridge atop a small lagoon, they’re welcomed into Aruba Surf Club, a timeshare property in Marriot’s Vacation Club International group. It’s hard to imagine a tropical resort better designed for family entertainment. Built between 2004 and 2007 and renovated in 2012, all of the sprawling upscale high-rise rooms are suites. The 450 guestroom suites and villas range from one- to three-bedrooms in size, and provide kitchens and washers and dryers to make life as easy as possible for families with children.

The resort’s garden courtyard is a veritable amusement park for kids, with a lazy river pool that winds itself more than 100 yards through lush plant-filled gardens, past waterfalls and around pool bars and Jacuzzis. Kids can grab a raft and spend all day exploring its nooks and crannies, while parents can relax with a Pina Colada and lounge chair, safe in the knowledge that their children are both contained and entertained. Indeed, with three restaurants and a kids’ club, it would be easy to spend an entire vacation on the resort.

That is, if it weren’t for the Surf Club’s location on one of the most beautiful beaches in the Caribbean. Palm Beach is Aruba’s high-rise tourist district, and it bustles with activity. The resort has an expedition desk to help guests arrange tours and activities, such as parasailing. As a bonus, the resort is attached to the Marriott Aruba and Stellaris Casino, so guests can take advantage of the many restaurants, bars and casino gambling options.

The only downside to this resort is its size and popularity, which makes it somewhat crowded, and sometimes extremely so. Unless you are an early riser, it can be a hassle to find a chair at the pool or reserve a palapa (thatched beach umbrella) on the beach. Sometimes the lazy river is more lazy than desirable, due to the jam of raft traffic. If you are looking for a quiet experience, check out one of the more laid-back resorts in the low-rise hotel district farther down the beach. If you are looking for an action-packed vacation full of water fun, however, the Surf Club is hard to beat.

The standard of furnishings is high at the Aruba Surf Club, and rooms are incredibly spacious, resembling an apartment rather than a hotel suite. All rooms feature a balcony overlooking the pool or the ocean. Cribs are available upon request and are free of charge.

Villas
Two-bedroom, two-bath villas are more than 1,000 square feet in size and sleep up to eight people, while three-bedroom units are nearly 2,000 square feet and sleep as many as 12. Bring grandma, the nanny and all the kids, and you'll still have elbow room. Beds are big and plush, and master bedrooms include a soaker Jacuzzi tub right in the room. Bathrooms are bright, with marble vanities and a separate stand-up shower and bathtub.

Kitchens are large and cheery, with luxurious granite countertops and cherry wood finishes. They include full-size refrigerators, microwaves and stoves (with ovens), along with all the requisite pots and pans you'll need to cook meals for the whole family. Living rooms contain a full-size table for dining, as well as a separate lounge area with a huge flat-screen TV and DVD player. Family-friendly movies are available to borrow from the Kids' Club downstairs.

Guestroom Suites
While the guestroom suites don't offer a completely separate living space, a sitting area with a sofa and a kitchenette with a mini-fridge and microwave are featured in the suites.

Our second time here and it was another terrific stay. This place is very well maintained and clean. The staff is always helpful and friendly. The pool area includes the Lazy River and is full of lounge chairs, pallapas, umbrellas, both in sunny, shady, busy and relaxing areas. Something for everyone. The flora and fauna along with the lizards and iguanas round out the beautiful resort. We hope to return again sometime.

chairman's club member who basically fights getting a reservation. once again on wait list for 10 months. no sure thing you get to a lot of resorts at a popular time of year. chair situation at pool is bad. this company is not what it used to be. a potential buyer has better options than a long time loyal owner.

Lazy River and Pools
The highlight of the Aruba Surf Club is the "Gulf Stream," a lazy river that flows throughout the property, carrying children on rafts, tubes, and noodles as they invariably shriek with laughter. Tubes are available at the lobby shop inside, and are mandatory for guests with kids. Also, save your breath and look for inflation stations around the pool! The pool flows around corners and under bridges, ending up in a wide basin with a waterfall, waterslide and water jets. Tucked into an island in the middle of the lazy river are two large Jacuzzi tubs that are open to adults and kids alike. A separate kids' wading pool is less than one foot deep for toddlers to splash in, while a zero-entry pool at one end of the river gives them a safe way to ease into the water.

Beach
The beach is just a short walk from the pool area; since the Marriott is located at the far northern end of the high-rise hotel district, it is somewhat less busy than the resorts closer to the center of the action. But make no mistake -- the beach can get crowded quickly, bustling with sunbathers and vendors selling aloe vera oil and peddling rides on jet-skis, parasails and huge inflatable rafts that are towed by speedboats. It's great people watching if you can get a seat from which to watch the action. To that end, the Marriott has a somewhat Byzantine system for rental of its palapa beach umbrellas. Half of the palapas are given away on a first-come, first-serve basis at 4 p.m. the previous afternoon, while the other half are given out at 7 a.m. that morning. Every day, a group of palapas are reserved for a $15 fee, which can be paid up to three days in advance. Though it might burden you to pay for a service that many resorts provide free, it will probably pay to make the reservation -- it's a small price to experience the beautiful place you came to see.

Kids' Club and Teen Center
Aside from the beach and pool, the Surf Club has plenty of activities for guests. The resort has its own Kids' Club, which is separate from the hotel next door. It's open to kids ages 4 to 12 for either half-day programs from 9 a.m. to noon or 1 to 4 p.m., or a full-day program. Activities include T-shirt painting, bingo and trips to the beach. On Tuesdays, Wednesdays and Thursdays, the club offers a parents' night out special. Kids enjoy Make Your Own Pizza Night ($35) on Tuesdays, which also includes arts and crafts. On Wednesday and Thursday nights, the club entertains kids with popcorn, pizza and a movie ($30). In addition, The Den, a center for teens, is open to kids ages 12 to 17, and is stocked with Wii and PS3 gaming consoles and a lounge. A separate game room is large and spacious, with foosball, pool and air hockey tables, along with a bevy of arcade games. Teens can also take advantage of the basketball courts outside.

Tours
The lobby has information desks for De Palm Tours, the island's premier tour operator, offering snorkeling and sailing trips, sightseeing tours, off-road adventures in Arikok National Park and trips aboard an underwater submarine. Additionally, the hotel has an office for Red Sail Sports, which can hook you up with boat rentals and watersports excursions on the beach.

The Aruba Surf Club has two restaurants on the premises and does not offer meal plans or all-inclusive rates.

Seaworthy's Pool Bar
Situated in the center of the lazy river, Seaworthy's Pool Bar is an open-air restaurant that offers frozen drinks and lunch options, which include sandwiches, pizza, chicken quesadillas and salads. If you're looking for a hearty meal, try the BBQ back ribs, especially on Friday nights when the restaurant offers an all-you-can-eat BBQ buffet.

Captain's Galley
On the beach side of the property, Captain's Galley is open for breakfast, lunch and dinner, serving burgers, sandwiches, wings and wraps. Both of the restaurants are casual and well-suited for families.

All About the Extras
Fitness Center
The Surf Club has a state-of-the-art fitness room with free weights and exercise and cardio machines. The room is surrounded by windows looking out on the garden, creating a pleasant atmosphere in which to workout.

Babysitting
The resort does not offer babysitting services; you'll have to do your own homework to find an outside agency if you are interested.

Wi-Fi
Free Wi-Fi is available in all rooms, which is actually a rarity at other Aruban resorts.

Sundries Store
Located off the lobby of the Surf Club is a large sundries store called The Marketplace, which carries a full complement of groceries for cooking meals in your room, along with gifts, clothing and beach toys.

The Art of Smart Timing
Aruba is a year-round destination, owing to consistently hot temperatures combined with cooling trade winds that keep the worst of the humidity at bay. There is really no uncrowded time, especially on bustling Palm Beach and the Surf Club's always popular pool area, but the low season, from April to November, does see a slight drop in occupancy, along with a corresponding drop in rates. The season picks up in mid-December and demand remains strong throughout March; prices are highest during this time.

Getting There
Flights arrive in Aruba at Aeropuerto Internacional Reina Beatrix, located about halfway down the west coast of the island. From there, it's a half-hour drive to the Marriott, which is one of the farthest hotels down the end of the high-rise hotel district on the northwest side of the island.

Getting Around
The Marriott does not provide transportation to or from the airport, but taxis are available for a flat rate of $25 one-way.

For Mom and Dad
Spa
Located in the Ocean Club next door is Mandara Spa, a Balinese-style sanctuary that offers dozens of treatments from manicures to body wraps, both in-house and in beachside cabanas. 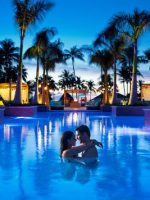 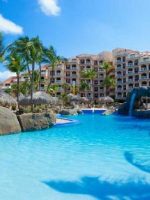 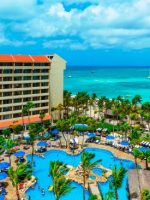 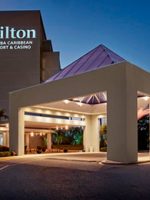 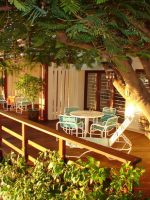 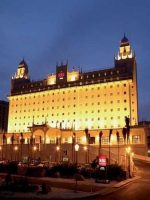