This sprawling white Victorian guesthouse at the foot of New Hampshire’s favorite mountain for hiking oozes country charm. Eleven guest rooms are individually decorated in English-style country dÃ©cor with big puffy comforters and wrought iron or four-poster bedframes. The owners pull out all the stops with high-thread-count sheets and fluffy towels to literally wrap guests in comfort.

For families, one room has two queen beds, one has a king and a twin, and one has two twins, allowing families to mix and match to accommodate any size group. The grounds are spacious, with plenty of room to wander (even if there aren’t any specific activities for kids). At night, the pub downstairs fills up with locals, who tuck into an expansive menu that goes beyond New England classics like Yankee Pot Roast to include pulled pork tacos and a chili ginger noodle bowl.

I really liked this inn. I stayed two nights in two different rooms - both were clean and comfortable. It had a happy and friendly vibe. It's not at all stuffy or pretentious. I'd stay here again if I was in the area.

We had reservations for 6 p.m. for a birthday. We found the rest of our party seated when we arrived, and the waitress, in what was to be her only punctual trip to our table, took our drink order. 2 of our party received theirs in no time. The rest of us (1 beer, 1 mixed drink and 1 bottle of wine) waited well over a half hour. We saw our drinks sitting on the bar, and had to flag down our waitress to bring them over. They didn't have the bottle of wine we ordered, so another was chosen. We ordered our appetizers, which didn't arrive until around 7:15. They were good, but the dirty dishes sat there until the waitress materialized, and we asked that they be taken away. BTW - "guys" is not the way to address a mixed group of diners. By 8 p.m., when we still hadn't received our dinners, and noticed that the couple who came in a good half hour after us had eaten, paid and left, and another couple gave up and cancelled their dinner order and just paid for their drinks, and another couple had to send a "refrigerator cold" plate back to the kitchen - we again had to flag down our waitress and inquire. She mumbled something about the computer system being down. Several minutes later, a gruff man who I assume was the owner, came and asked what each of us had ordered. In short order, the food was delivered. My fish tacos were room temperature, and the tortillas dried from sitting, but it was tasty. The other meals were satisfactory besides the au jus and horseradish sauce missing from one of the plates. At this point, it was well after 8 p.m. While our water glasses were refilled periodically, no one asked if we wanted another drink/beer, which we gladly would have taken at that point. Subsequently a woman in a chef's coat and hat came out to apologize. She in turn blamed the waitress for the SNAFU. We ordered desserts, and when we got our bill, noticed the more expensive bottle of wine was still on there. At this point it was after 9 p.m. and we were just going to say to heck with it, but it's the principal. So we flagged the poor befuddled waitress once more, who finally understood what we were saying, and she brought back an amended bill with NO wine charge. We actually should have been comped a lot more than a bottle of wine for the experience, but we took it and got out of there!

The Inn at East Hill Farm 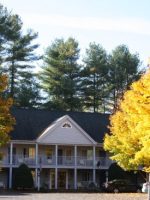 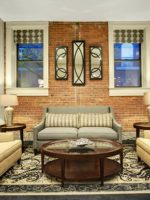 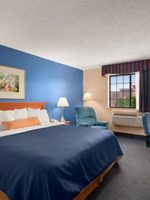