Some family resorts, as great as they are, can make guests feel isolated when they’re located quite far from all the excitement of their destination. That’s not the case with the Renaissance Aruba Resort & Casino, which is located in the heart of downtown Oranjestad, the island’s bustling capital. It is seamlessly integrated into the town’s marina area, with an upscale shopping mall in the resort itself, and tours and watersports galore.

The resort is actually two properties in one; on the landward side is the Marina property, containing 297 rooms that are exclusively for adults. The lobby is dramatically appointed with white marble columns (think Roman amphitheater), and the property houses a casino and adults-only pool overlooking the marina. Even though this area caters to adults, it still offers several family-friendly restaurants, open to all guests. Ocean Suites, the hotel’s other property, is located across the street on the harbor itself. Its 256 suites, pool and small beach area offer a quiet, calm atmosphere.

One of the resort’s most attractive features, however, can’t be found at either property. The Renaissance Aruba Resort & Casino owns a private island, just a short boat ride away, retained exclusively for use by its guests. The island includes both a family-friendly and adults-only beach area that makes up for the lack of beachfront property at the resort itself. Nevertheless, if it’s beaches you’ve come looking for, the Renaissance Aruba Resort & Casino may not be the best choice for you, lacking the miles of white sand offered by the hotels of the high-rise and low-rise districts north of the city. If you’ve come to experience Aruba and feel like you are a part of the island community, however, there’s no better choice on the island.

The 256 rooms in the Ocean Suites are well-designed for families, with one bedroom with a king bed and a separate living room with a pullout couch. Cots and cribs are also available at no extra charge. Both rooms have plasma TVs with On-Demand movies, and a small kitchen area includes a microwave and fridge. Bathrooms have green marble vanities with bathtubs and Aveda bath products. Wi-Fi is free in public spaces, but not in the rooms.

All the rooms are decorated in a beach theme, with bright blue and yellow colors. The rooms are scheduled for a complete renovation in 2014, at which time they'll take on a more contemporary, urban design, and the bathtubs will be removed to add more room to the bathrooms. The only downside to the rooms is their size, which are on the smaller side for suites. Kids stay free.

I recently just stayed at this hotel and really enjoyed my stay! Val, head of guest experience was particularly friendly. The Ocean Suite king room had a wonderful view of the pool area and ocean. The hotel was conveniently located within walking distance of all the restaurants and shops in town. Particularly, I loved the Renaissance Island. This is a must see attraction to enjoy an exclusive beach experience, and swim with the Flamingos. I would happily stay here again!

Best hotel on the island, perfect for honeymoon

Recently sent a week here for my honeymoon. The hotel is brilliant, staff were great, food was excellent and a broad selection. We were worried that the hotel was away from the high rise hotel area but there was noting in that general area. Having talked to people staying in other 5 star hotels on the island (who were disappointed) we we very happy with our choice

The Renaissance Aruba Resort & Casino runs its own Kids' Club out of a small clubhouse in the Ocean Suites property, complete with Ping Pong and Foozball tables, toys and arts and crafts supplies. Scheduled activities include face painting, bingo, karaoke and sandcastle building and shell hunting on the beach. The Kids Club is available for children 5 to 12 years old, either by the hour or for half or full-day programs (from 9:30 a.m. to 4:30 p.m.). It is also open on Friday and Saturday evenings, from 6 to 9 p.m., with movies and storytelling.

The Ocean Suites has two freeform family pools, with a swim-up pool bar located in the middle. To make up for the lack of a beach in the marina, the resort has constructed a small lagoon off the pool area that features a small sandy beach enclosed in a breakwater. The real draw for guests, however, is the private Renaissance Island, a short boat trip away. Speedboats leave every 20 minutes at Ocean Suites' dock and from a special landing accessed through a tunnel inside the Marina Hotel. For kids, the boat ride itself is one of the star attractions of the trip, passing underneath the approach lane for the airport, where planes can frequently be sighted. On the island itself is a special station for kids, where they can listen to the conversations between the aircraft control tower and approaching planes.

The island has two beaches -- one for adults, which includes a special spa cove for outdoor treatments, and one for the family. While the family-friendly beach is larger than the one at the resort itself, it is still somewhat small and enclosed within a lagoon, which makes it perfect for families with young kids, though it lacks some of the grandeur of Aruba's ocean beaches. The island also includes a restaurant and a small sports center where guests can rent floats, kayaks and snorkeling equipment. Then, of course, there are the iguanas, which teem in the island's mangrove swamps and come out daily to eat lettuce offered by kids in morning feedings.

Farther afield, the resort contracts with De Palm Tours, the island's premier tour operator, whose main office is right on the marina. Snorkeling and sailing trips and jeep tours of the island are among the dozens of activities offered. Also in the marina is the Atlantis Submarine, which offers rides that dive to depths of 150 feet below the surface of the water.

The resort's location makes it easy to explore the attractions of Oranjestad, which is extremely safe and walkable, even in the nighttime hours. One nearby favorite is Fort Zoutman, a historical site and museum that host a festival every Tuesday night, featuring traditional Aruban music and dance.

Several restaurants can be found at the Marina Hotel, including the resort's premier restaurant, L.G. Smith's Steak & Chop House, which serves Angus beefsteaks, including everything from a six-ounce petit filet to an enormous double rib eye for two. Additionally, the restaurant serves lobster and other seafood dishes. Despite its upscale atmosphere (and price tag), it is a popular choice for families, and children are welcomed. Also at the Marina Hotel is Aquarius, which offers a breakfast buffet and more casual entries for lunch and dinner, including burgers and seafood with a Caribbean vibe.

Even more restaurants are located in the Renaissance Mall, and are part of the resort's all-inclusive meal plan. Many of them are welcoming to families, including the Dutch CafÃ© de Plaza, the Chinese restaurant Hung Paradise and the al fresco Don Carlos Restaurant, which overlooks the waterfront and serves Italian specialties, as well as fresh seafood dishes.

Renaissance Island has its own restaurant, Papagayo Bar & Grill, which offers a pool bar menu of fresh salads, sushi and other light fare.

Children under age 12 eat for free at all restaurants at the resort.

All About the Extras
The resort helps to arrange babysitting from a pool of reliable sitters. All-inclusive packages include dinners at any of the restaurants operated by the resort, as well as drinks and complimentary use of the Kids' Club.

The Marina Hotel has a fitness center with cardio machines and free weights, as well as yoga and aerobics classes; another fitness center is located on Renaissance Island.

The Art of Smart Timing
Aruba's weather is amazingly consistent throughout the year, averaging around the mid-80s and varying by only a few degrees from summer to winter. Aruba also has low humidity, and constant trade winds keep the sun from feeling oppressive. Like the rest of the Caribbean, Aruba is under risk of hurricanes from August through October; however, the island's location at the southwest of the Caribbean keeps it from bearing the brunt of the storms.

The high season is approximately mid-December through the end of March, when hotel rates are the most expensive. Properties cut their rates by 20 percent or more during the low season, which goes from April to November. Even during the low season, however, the island can still be crowded since it corresponds with summer vacation in Europe and North America, as well as winter in South America.

Getting There
Flights to Aruba land at Reina Beatrix International Airport, located just south of Oranjestad, a 5- to 10-minute drive from the resort. While the resort does not offer shuttle service, taxis are available for a flat rate of $18. Several rental car companies are located at the airport, and a Hertz office is located within the hotel.

For Mom and Dad
Located inside the Renaissance Aruba Resort & Casino, Okeanos Spa is one of the top-rated spas on the island, featuring couples massages, hot stone treatments, reflexology and unique body wraps utilizing everything from algae to yogurt. For no extra charge, treatments can be arranged at a private "spa cove" on Renaissance Island. Another special package at the spa itself includes a Swedish massage for two, followed by a tasting menu from L.G. Smith's Steakhouse on a patio overlooking the marina.

The Renaissance has two casinos, including the Crystal Casino inside the Marina Hotel, which is Aruba's only casino open 24 hours a day for both slots and table games. The decor is over-the-top elegant with crystal chandeliers mirrors, and columns. Across the street, the Seaport Casino is located on the waterfront and has a sports book with a live satellite feed, as well as slots and table games. 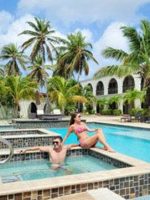 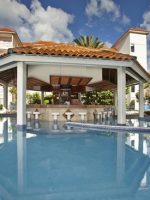 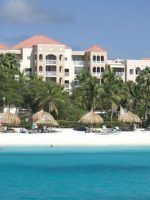 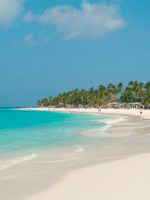 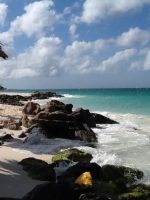 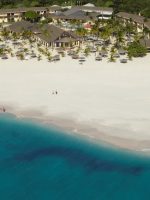