Residence Inn St. Louis Downtown is a nice property for families with children to stay. The hotel is just around the corner from the Missouri Botanical Garden, Saint Louis Science Center and Tower Grove Park. Some other nearby attractions include the Cahokia Mounds State Historic Site and Anheuser Busch Brewery Tour. This 3-star hotel has 188 suites. Each suite includes a kitchenette and free high-speed Internet. This St. Louis hotel also has a swimming pool and fitness center. LoRusso’s Cucina, Missouri Baking Company and Crown Candy Kitchen are all kid-friendly restaurants that are reputable and are close to the hotel.

Not a family hotel at all

We had a good stay till we needed something. On the day of the checkout we had asked for our Bags to kept in the locker area so that we could enjoy STL before catching our late night flights and The Staff was gracious enough to let us do that.

In the evening while we picked the luggage up, I got notice that my flight was cancelled due to Dorian and I would need to spend another day in STL. So I began searching for a Marriott property near the airport (since we would have to get on the plane whenever we got notice).
Since this would take some time (15-30), we were hoping to get some milk for one of the toddlers in our group who was tired and was starting to get fussy. This hotel did not have milk in the market place. The nearest milk was across the freeway at a BP Gas Station.

We had to search high and low and we got it after extreme difficulty. warming it up was another battle. While this was going on, the toddler became a little fussy and started to cry so we tried to take him outside the hotel lobby so that we do not disturb other guests.
One of the guests who was checking in starting passing abusive remarks in the third person at the mother and parents, apparently the child crying was not something had anticipated. While we did not expect any empathy from the guest who was clearly not bothered about why the child was crying, the hotel staff did nothing to ask us if there is anything that could be done to help us instead we were asked if we had a room and would be checking in soon and were siding with this other guest. While we appreciate the difficulty of the hotel staff, we would at least expect them to inform the guest since there were kids within hearing distance and were being made to hear all of this.

We stayed 5 nights at this location and had house cleaning once. Had to even call for more toilet paper. The pool wasn't fit to swim in. I seen a staff member park in a handy cap parking spot without a handy cap tag anywhere. The managers drinks in the evening is not worth the wait. The omelets in the morning was about a 2 out of 10. Management hasn't been any help resolving my issues. 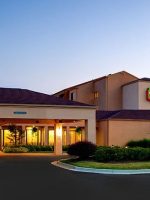 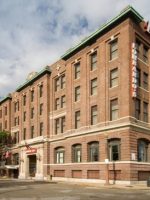 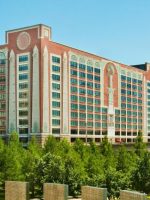 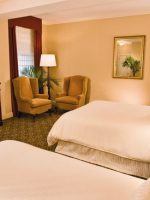