Vogue Bodrum Hotel & Resort is a family-friendly and all-inclusive hotel located on its own private beach within a regional park. Spacious rooms designed with families in mind, a full offering of activities and a quiet location make this an excellent choice for families. The hotel’s Family Suites feature two bedrooms and accommodate four guests. Kid-friendly amenities include supervised activities, a game room, a kiddie pool, a playground, waterslides and a lazy river. Other family amenities include an onsite cinema, bowling, an outdoor swimming pool and an indoor swimming pool. Onsite dining is available. There is also a snack bar at the pool.

THE GOOD THE BAD AND THE UNACCEPTABLE

We stayed at the Vogue Bodrum with family in October 2019.

There are lots of great things about this hotel- a few niggles so I’ll start with those so I can end on a positive!!

So the small Niggles........We arrived on the 12th but already many of the facilities were closed early for the season.

The website states lots of restaurants but only 1 open (again as end of season) however you will never go hungry at this hotel- lots of food (although repetitive ) and also have a cafe and snack bar open so you can pretty much constantly eat! They even have a midnight buffet from midnight to 2pm!)

As we arrived mid October the pool snack bar was only open a day- only negative at the pool- being charged 10lira to have my sons Inflatable blown up ! Thought that was bit weird for a 5 star!

In terms of the room- there was a Damp smell that came from the bathroom but fine if you keep the door closed!

Final issue- lack of English speaking staff- although they try their best to get someone who does speak English- communication was a bit of a struggle- the only thing that makes me think twice about coming back.

Now the positives..........
This hotel is amazingly clean! The cleaning staff are literally everywhere and I have to say they are a credit to the hotel.

Food choices are vast (even a
Little repetitive ) but there is enough choice for you to choose different food should you wish!

The mini kids club was fab- thankfully open during our stay- again English a problem - but the staff made the kids feel very welcome. My 2 loved the mini disco and Luna Park at night (even though only half the rides were in operation)

Dino Park- was ok - much smaller then I imagined but then again everything looks amazing on the internet doesn’t it !

The staff are really helpful(when understanding what I’m
Saying!) they gave us a late check out till 2pm without charge however were wanting to charge 50 dollars (normally 100 dollars) if we wanted the room till 6pm (our taxi pick up was 7:30pm)

However there is so much to do in the place that my two were happy to have a last trip to the bra h and play park there!

The pools and beach is stunning - again super clean) although I feel
That water was a little cold - but again it is October! Temperature was 26 -27 degrees but you may need a cardigan to cover your shoulders at night! They have a “heated” indoor pool but temp not much warmer that outside!

Overall the only reason I never say 5 star is because we probably never got to fully experience the Vogue in its entirety! Had all facilities been open- maybe I would have rated 5 star!

Would I recommend - absolutely!!!! 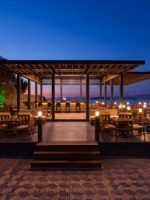 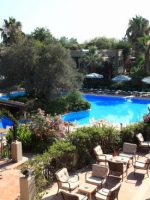 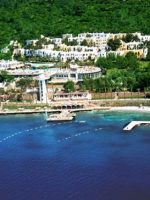 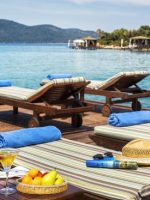 The Bodrum by Paramount Hotels & Resorts 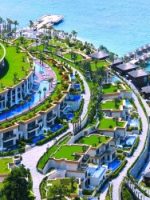