This is in many ways your typical Embassy Suites hotel. Rooms are reasonably spacious and well-appointed. Some of the furniture is dated and may be nearing the end of its useful life. The Staff is quite pleasant and responsive. The breakfast buffet is pretty standard for an Embassy Suites.

On the negative side:

Parking is unnecessarily confusing. If you're an arriving guest, you've no idea where to go--there's no place to park. The signs at the gates say that guests are to use their room cards, and not the paper tickets, but someone who's just arriving doesn't HAVE a room card.

In my two-bedroom suite, I found the following problems:
- When we arrived, there was loose glitter on the living room carpet. It had apparently not been vacuumed.
- There was no backup roll of toilet paper in either bathroom.
- The room was not cleaned the first day.
- One of the bedroom doors doesn't latch. This is not a maintenance issue: looking at it, this could NEVER have worked. The bolt is about an inch higher than the hole in the strike plate. It's a manufacturing or installation defect.
- In one bathroom, where there is a shower stall and no tub, there's no place to put your soap/shampoo/conditioner other than the floor. No soap dish, no wire rack, nothing.
- In one bathroom, the basin faucet is missing an aerator, so if you turn it very far open, water sprays everywhere.
- The HVAC thermostats are completely screwed up. The room felt cold when we arrived, and the thermostats said it was 68 degrees, so we turned them up to 72. No impact. The fan ran, but no warm air. It wasn't until we turned the temps up to 89 that we got warm air out of the vents--the room never did get to 89, but by turning it to 89 we got it to reach a reasonably comfortable temperature.
- When I saw my bill, it did not agree with the price quoted on my reservation. I went to the front desk to get it addressed, and the desk clerk told me that it was higher because my upper-floor upgrade cost $45 per day. Only after I showed him the email that said it was $15 per day, and so $45 for my entire stay, did he correct the bill.
Taken together, these make for a less than wonderful experience. Some attention to detail on the part of the hotel would make this much better.

Embassy Suites was exactly the high quality I've come to expect--until I found my car vandalized in the PAID (yet unmonitored, unsecured) lot the next morning--and had to pay a basically $380 surcharge in order to repair the damage to my car.

Manager when I checked out and found the damage spoke as though she was aware of an increase in incidents of vandalism/theft in their parking lot, and yet no one had previously warned us of this. There was no apparent theft/vandalism deterrent outside the gates to prevent unauthorized vehicle entry to the lot. The only thing remotely related we saw were a couple unlit, poorly placed signs claiming that the hotel was not responsible for damage or theft done to cars in this lot.

We were asked to fill out a detailed report form "for [the hotel's] insurance company." But when we asked if their insurance would cover the damage, we were told the manager did not know, and we would be contacted by the insurance company within a few days. Insurance company left us a message to say they were not going to cover any damages, and hope our insurance took care of everything.

If you know theft/vandalism is happening frequently in your PAID parking lot, wouldn't it behoove you to hire security? Create deterrents? I guess it's just easier to not say anything until the next morning, when your customers complain of their cars being vandalized--then tell them to fill out a form (for the hotel's good, not for the customer's) and say insurance will contact them, so customers might be placated and not make a scene in the hotel's lobby.

I have to seriously consider whether to trust another Embassy Suites property after this. The beautiful lobby, room, happy hour reception, and custom-to-order breakfast are great--but not worth the additional $380 "surcharge" to repair the car vandalized in their insecure parking lot. 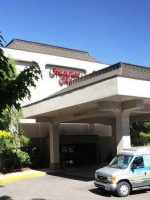 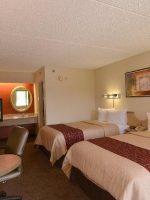 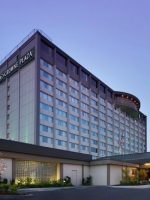 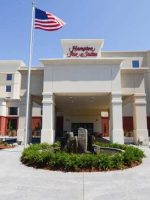 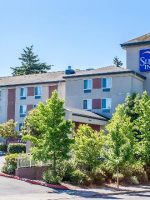 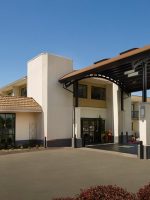