For children, Quebec City’s Chateau Frontenac is a fairy-tale castle with its green turrets perched high above the fortified walls of this UNESCO World Heritage site. For parents, the 618-room hotel is the premier address in this charming city. At the Chateau Frontenac, the city comes to you, with street performers appearing right outside the doors around the Samuel de Champlain statue. Tour buses come and go to see the view of the St. Lawrence Seaway from this height and to tour this grande dame, which first opened her doors in 1893.

But don’t expect a dusty old museum piece. To celebrate the 400th anniversary of the arrival of Champlain in 1608, the Frontenac, now owned by Fairmont Resorts, refurbished all of her rooms, replacing mattresses and adding upscale accessories like Miller Harris soap and shampoos. After walking all day up and down the hills of the city, children will enjoy the large indoor pool, while mom and dad can soak up the bubbles in the nearby Jacuzzi. There’s also an outdoor lounge area next to the pool to relax with a newspaper or book in hand.

Yet, the best part about the Chateau Frontenac is the location, high atop the city. The promenade behind the hotel leads to the Plains of Abraham and Canada’s first urban national park, Battlefields Park. Or head down the Breakneck Stairs to the Lower Town and the many boutique shops that line Petit Champlain. With creperies, patisseries, boulangeries, and fromageries around every corner, this North American slice of France rewards travelers young and old with a smorgasbord of culinary treats they’ll want to sample — and then bring back home as souvenirs.

With 618 rooms in this castle, it's not hard to find your own particular design to fit your needs.

Guestrooms
The guestrooms are the most affordable option with two double beds. The bathroom is spacious, with updated shower and the perfect jet stream of water. The downside is that we didn't have much of a view, there is a fee for Wi-Fi, and there were only three dresser drawers for four people. We had to pile the kids' clothes on the outside wall next to the bed.

Suites
The Junior Suite and Studio Room might be more preferable for families of four. Along with two double beds, they feature a decent-sized sitting area, so you won't be running into each other. Refrigerators are also available for a fee. There are also more expensive rooms on the special Fairmont Gold floors that have their own concierge and a private lounge with breakfast in the morning and drinks in the afternoon.

The hotel is impressively regal, grand, elegant, majestic and historic with excellent food and service. (When you tell someone there where you are staying no one says "where's that?)"
We were welcomed with friendly smiles by Sandrine, Gold Assistant Manager/Concierge and Sonia, Gold Supervisor/Concierge, when checking in on the 14th floor private welcome desk/concierge.
They were professional; efficient, friendly, patient; and very helpful in suggestions.
Sandrine gave us a personal tour of the Gold Floor private lounge while describing the amenities; detailing the personal concierge service, complimentary continental breakfast, hors d’oeuvres hours, Wi-Fi included & more.
The daily variety of food, presentation and service was excellent.
Our 14th floor room was stylishly decorated with a picture window; a city view; chaise lounge, and great Wi-Fi reception.
It was a wonderful Gold Floor Fairmont Frontenac experience.
(be aware there was some construction/maintenance noise at times) it did not damper
our stay.

One of a kind - Well worth the splurge

It was almost a magical experience staying at the Chateau de Frontenac. It is iconic and legendary, and easily lived up to its reputation and price. The hotel is absolutely beautiful, and we really liked our room which overlooked a park and the river. We chose a queen "Chateau" style room as we prefer traditional furnishings in keeping with the place. I was not disappointed. Lovely decor, in perfect spotless condition. New and luxurious bathroom.

The breakfast buffet on enclosed terrace overlooking the river was sumptuous. Especially liked the whole-grain croissants, delicious pastries, choice of cereal including oatmeal, fruit salads, pretty much everything you'd ever want in a continental breakfast. (A hot buffet was also available.) Service was outstanding in hotel and restaurant. The icing on the cake was one of the free activities offered to guests: a presentation on the history of Quebec which was truly fascinating and well done by Monsieur Jean Gagnon in period costume. This talk really added to our knowledge and enjoyment of Quebec (and the Chateau). Also liked the many exhibits in the hotel - sort of a mini-museum unto itself. All in all, a fantastic stay.

Area Attractions
Since this is a city hotel, not an ocean or lake resort, you probably will be spending much of your day seeing the sites of Quebec City, only to return in late afternoon. The Musee de la Civilisation has innovative hands-on exhibitions like their Earthquake simulator, where you enter a makeshift house and feel what it's like to be in an earthquake, try on costumes from the Middle Ages, or play a game on the future of cities in the wonderful Urbanopolis display. If you're here in summer, walk around the Plains of Abraham and check out the resplendent Joan of Arc gardens. A 20-minute drive outside of the city is Montmorency Falls, one and a half times higher than Niagara. You ride a cable car to the top and then take a short stroll to a bridge just above the raging river.

If the kids are bored, simply step outside the hotel and there's a good chance some wannabe Cirque du Soleil performer is doing some incredible acrobatic skill, juggling, or performing magic tricks by the Champlain statue. Unfortunately, since this is a city hotel, there's no formal children's program. With all the sites the kids will want to see off property, there's really no need.

Winter Fun
With all the snowfall they receive, Quebec City is also an ideal winter destination, especially during Winter Carnival (www.carnaval.qc.ca) in late January to mid-February. More than one million people descend upon the city to cheer on the competition in Le Grande Viree, a dogsled race that cruises through the heart of the historic Old City, or watch paddlers sprint across the turgid waters of the St. Lawrence Seaway. The French-flavored festivities continue with tours of the Ice Palace, a giant medieval castle constructed of pure crystalline water, parades, snow sculpture contests, inner tube sled rides, and dancing to live music.

Pool
Back at the Frontenac, the favorite kid-friendly activity is the indoor pool on the sixth floor. It's the perfect place to unwind before heading back out for dinner. Younger children can also take advantage of the small wading pool.

Hotel Tours
Also sign up for the 50-minute tour of the hotel, led by an actor in 19th-century garb. She points out the mail chute next to the elevators, where they once found a letter dated 30 years ago! She'll also lead you to the Pink Room, where Franklin Roosevelt and Winston Churchill met to discuss invading Normandy during World War II, the gardens on the roof of the 5th floor, popular with the executive chef for picking herbs that go with dinner, and the frieze in the lobby created by the same person who designed the interior of Grand Central Terminal.

Place Dufferin
Every morning, the Dufferin Terrace in the basement of the hotel features a vast selection of juices, fruit, pastries, eggs, maple-flavored Canadian bacon, sausage, and pancakes with real maple syrup. The buffet and a la carte menu is open from 7 a.m to 10:30 a.m. daily

All About the Extras
Kids loved the hotel mascot, a large Burmese mountain dog that always seemed to be sleeping next to the concierge desk.

Fitness Center
You'll want to jog on one of the trails because the fitness room is absurdly small for a hotel of this size. You may need to get up pretty early on vacation to snag one of the two elliptical machines. You're much better off trying to do laps during the adult swim times at the pool.

Babysitting
Bilingual babysitters are also available for an hourly fee, with a three-hour minimum.

Wi-Fi
There is a fee for Wi-Fi.

Pet Friendly
Pets are welcome to stay here for an additional fee.

The Art of Smart Timing
If you're brave enough to endure the frigid temps and snow of winter in Quebec City, three hours north of Montreal, then you deserve the more affordable rates. You'd be wise to go during Winter Carnival when the city shakes off the icicles for weeks of good ole fashion fun. If you do make it to town in winter, be sure to check out North America's only ice hotel, Hotel de Glace. New rooms are created each year out of 12,000 tons of snow and 400 tons of ice, along with an ice bar, Jacuzzis, and a dance club. Bring those long johns. Temperature inside is a mere 27 degrees Fahrenheit.

Getting Around
Leave your car in the lot and let the concierge design your day. This is a great walking city and we found the concierge desk to be an invaluable source for maps, directions, and advice on what to see and where to dine. Also ask them for the brochure on jogging routes, which maps out scenic choices that line the St. Lawrence.

For Mom and Dad
1608 Wine and Cheese Bar
Offering a great view of the St. Lawrence River, the adults will love to enjoy a cocktail or glass of wine here. 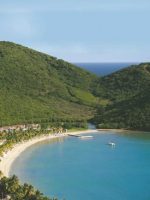