This is a second-generation, 35-year-old family-owned business. Hotel Marques de Cima is located on the main avenue of Nogales and has 84 rooms. It is also very close to Nogales Mall Shopping Centre, about 1.5 miles from the city center and the US border is 2.5 miles away. The hotel offers free, private parking, air-conditioned rooms, free Wi-Fi and all rooms come standard with cable TV, a safe and a private bathroom with a shower and free toiletries. Proximity to attractions on both side of the border make this popular.

On June 15, 2019 at around 2 a.m., I decided to stay here. Unfortunately, I did not have a pleasant stay and this is why... The guest that stayed next to my room blasted their music until 5:47 a.m. I made numerous attempts to contact the reception desk to inform them of this concern of mine; however, I kept on receiving a busy tone. The reason I did not walk over to the reception desk is because I did not want to make it obvious to the guest next to me that I had done a complaint against them and run a risk of retaliation. A little after 6:00 a.m., I spoke with the receptionist Maximina H. and informed her of my concern and she said, "You should have called us so we could have sent the security guard sooner." I told her I did, but I kept on getting a busy tone every time I tried to call. She then replied, "Well, there is no reason why your phone wouldn't work." The tone she used made me feel like if she believe I was lying and as if it was my fault why I couldn't get rest. I then asked for the manager's name she said, "Carmen R." Spoke with the manager and said I would need to speak with the director, "Carlos J." Spoke with Carlos and he stated that he was able to check the cameras and their system and he discovered that the phone that was in my room was not working and they were not aware of this. I then explained the customer service that I received was very poor, and he apologized. He further said that the only thing that he could do was give me a 20 % off discount (equivalent to approximately $12 US currency) for the inconvenience in my next visit because it wasn't them who created the noise and they have no control over their guest behavior. I then asked him to place himself in my shoes and he replied, if it were me that couldn't sleep I would have gone by foot to the reception desk and informed them of the situation. I believe the least I should have been given was a complimentary night for all of the inconvenience that I experienced during my short stay. Perhaps customer service is not their priority. I highly recommend staying at Hotel Caribbean. It is only 2 minutes away from this hotel.

by Yolanda B M

We rented two single and two double standard rooms, all rooms were clean all time and the staff was very friendly, they even accommodated my father in the first floor due that he is a senior with some problems climbing up stairs. That is the only fall down, that it is a 5 story hotel with no elevator and only one stair. That could be dangerous if any contingency occurs. 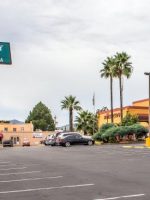 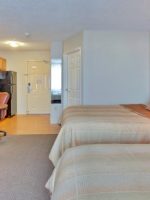 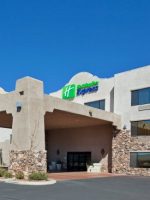