On our first morning at this sprawling resort, my 11-year-old son and I sipped cocoa on our patio as palm trees swayed in the breeze. The air smelled fresh and salty. Everywhere we looked, people were enjoying the outdoors — biking to work, running, and strolling along waterfront paths.

While the Hotel Del Coronado might have more name recognition and an oceanfront vs. bay-front location, the Marriott Coronado has its advantages, especially for families. The resort is a good value, with spacious 500-square-feet standard guest rooms, easy access to San Diego attractions via the hotel’s ferry and an adjacent public park, all with magnificent views of the San Diego skyline.

In addition, the resort’s apartment-sized villas, super friendly staff and “corners of comfort” (outdoor seating areas and Adirondack chairs scattered throughout the property) give the place a relaxed, home-away-from-home, feel.

The hotel was reflagged as a Marriott resort in 1997 and underwent an $18-million renovation in 2008. It has a guest room and villa refurbishment planned for 2014 through 2015.

The well-appointed guest rooms are a roomy 500 square feet and include either a balcony or patio, a king or two double beds, love seat-sized sofa, and a bathroom with a glass enclosed shower and separate tub. A long table-height counter separates the bedroom portion of the room from the bathroom and closet. It has a built-in mini-fridge and bench seating, which makes for a great second desk area for kids' electronic devices and toys.

In addition, each room has marble countertops, Egyptian cotton sheets, down pillows, bathrobes and oversized room safes that can fit a family's-worth of laptops and iPads. Pack n' Plays and rollaway beds are available gratis. Wi-Fi, however, costs $12.95 per night for up to two devices (complimentary in the hotel's public areas).

If you have babies and/or toddlers, consider requesting a room in the North wing for quicker strolling access to Ferry Landing's shops and restaurants. Rooms in the South wing are closer to the villas, fitness center and the community park. Connecting and ADA-compliant rooms are available upon request. However, they cannot be guaranteed in advance.

Note: there is typically a $20 to $30 price variance for a room with a bay-view as opposed to a resort view. Ask for an upgrade when you arrive and you have a good change of getting one gratis if they're available. If you're a morning-coffee-on-the-patio kind of person, the view is well worth the price.

A bit dingy and dated. About what you would expect for the price level. Had a stay booked for me here for a conference that I was not consulted about. I eventualy checked out early to move to a hotel downtown. Might be good for families or those who don't travel often.

Relaxed atmosphere, beautiful view of Coronado bridge and bay. Clean and tidy rooms. Nice area’s to sit outside for Breakfast or dinner. Great area to walk around. Not far from Coronado restaurants and not far from the beach and Del Coronado Hotel. Great choice of restaurants!!

The resort's main pool, which ranges in depth from three to five feet, is located behind Current restaurant and overlooks the bay. In addition to swimming, you can relax in poolside loungers, play ping-pong, soak in the hot tub and laze in a hammock. Summer Saturday afternoons feature live music.

Tucked in the middle of the resort's villa section is the smaller, paisley-shaped Villa Pool, which also varies in depth from three to five feet. This quieter pool area has two tables with chairs, a smattering of lounge chairs, a hot tub and bathrooms and an outdoor shower with tile work that could use some TLC.

The Coronado Kids Club (for children age 4 to 12) is available Mondays, Wednesdays and Fridays from 11 a.m. to 3 p.m., from late June through Labor Day. The club is run from a repurposed meeting room. Kids can partake in crafts, games, Wii, indoor and outdoor activities, scavenger hunts, and lunch with their new friends (you can see activity photos on the resort's Facebook page). The cost is $25 per child. Register in advance through the concierge.

Complimentary arts and crafts are offered at the main pool on Saturday afternoons in the summer. Also in the summer, you can rent jet skis, kayaks, sailboats and miniature speedboats from Marriott's pier. The only notable water activity you can't do as easily from Marriott's bayside location is surf, but you can take private or group lessons through Coronado Surf Academy (http://www.coronadosurfing.com/), which is a short bike (or taxi) ride away to the Hotel Del side of the island.

The academy's instructors are great with kids. They run a surf camp each summer and have even taught dogs to surf. Wetsuits and boards are provided.

In addition to the Kids Club and water sports, the resort has five lighted tennis courts, and a basketball court available at no charge. Racket rentals are $5 per day. Basketballs can be borrowed and are complimentary.

Bicycle rentals are offered year-round from the fitness center, and include adult bikes (infant attachments available) and two or four passenger canopied surreys, but no children's bikes. Smaller adult bikes are relatively suitable for kids 11 and up. Bike fees are $10 per hour, $25 for four hours and $35 for day rental. Two-seater surreys can be rented for $20 per hour, and four-seaters are $30 per hour. The surreys are great for kids, and are a fun way to explore the resort's pathways (adjacent public park) and to reach nearby Ferry Landing, which has many restaurants and shops.

Junior animal lovers can duck inside a giant birdcage-like aviary (located in the South wing) to see finches flying about, or visit pink flamingos at the pond between the main hotel and the health club.

Sand Bar, located at the main pool, serves snacks and lunch. In the lobby area, Tide Cocktail Lounge offers light appetizers, burgers and game-day specials, along with big-screen TV's. While there are a few regular tables, much of Tide's seating consists of counter-high tables and sofa groupings, which can be a bit trickier for families with young kids, or babies who need a high chair. The restaurant is open 5 p.m. through midnight.

High chairs and coloring books are available, and room service is open 24 hours a day with a kid's menu that includes Mickey Mouse and chocolate chip pancakes for breakfast ($9), and your typical burgers, chicken tenders and hot dog fare ($8 each), as well as grilled salmon with vegetables ($14) for lunch or dinner. Adult items range from Cavetelli pasta with sausage ($20) to filet mignon ($35).

You can stock up on beverages and snacks for your mini-fridge at Albertson's supermarket, a two-block walk away.

All About the Extras
The resort's full-service spa includes a fitness center, 25-yard lap pool, and classes that include yoga and body sculpting, for ages 18 and up. The spa offers several types of facials, massages and nail treatments, including a "Mother to Be" massage and an in-room couples massage.

The Marriott Water Shuttle departs Coronado every half hour. It returns from San Diego at quarter after and quarter of the hour. Fees are $6 per person each way, $3 for kids age 5 to 11, and free for those under 5.

Babysitting is available through Marion's Child Care, a company that has been providing childcare to Coronado (and San Diego) visitors for more than 30 years. Sitters range in age from college-age to grandmothers, and come prepared with toys and games that are appropriate for your child's age. Visit: http://www.hotelchildcare.com/ for more information, rates and testimonials.

The Art of Smart Timing
While the hotel's facilities are open year-round, children's programming and most water sport rentals are available in the summer months only. Peak season is mid-spring through the summer. Your best bets for reasonable rates and good weather are mid-September through early March. In addition, AAA members can take advantage of special rates, plus promotions that allow kids 12 and under to eat free.

Getting There
The resort is a short ride (just over seven miles) from San Diego International Airport, and is accessible by taxi for roughly $25 each way, or by Super Shuttle for $16 each way. If you plan to stay close to the resort and visit attractions in downtown San Diego, you can get away without a car and use the resort's water shuttle, and explore Coronado by taxi or bike rental. Consider the size of your family, whether or not you'll be toting a stroller, and the places you'll want to visit in order to determine if a rental car is right for you. There is a $25-per-day resort parking fee.

For Mom and Dad
Cheap and unbeatable date night: buy a bottle of wine (or two) from Tide's or Albertson's, and relax in one of the waterfront hammocks strung up between palm trees. From there, you can see the city lights bathe the bay in a golden glow and listen to waves lap against the shore. 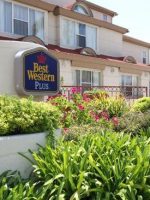 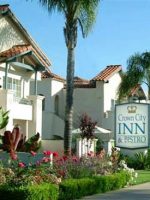 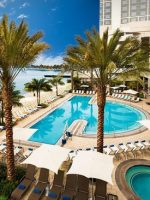 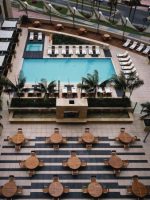 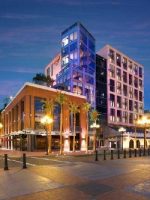 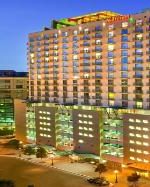