Located near Lake Tahoe, this inn is perfect for winter or summer activities. If skiing or snowboarding is on your family’s agenda than Pepper Tree is an ideal accommodation since it is located near Homewood Ski Resort. But if the snow is not your family’s thing, than a dip in the seasonal heated pool would be great in the summer. The guestrooms offer king or queen beds and feature a refrigerator, microwave and in-room coffee service with ceramic mugs. The complimentary breakfast will fuel families for a day at the lake or the slopes. Guests will also find several Lake Tahoe restaurants within walking distance to Pepper Inn.

We liked the hotel location. Our room was fine. Nothing fancy. We just needed a clean place to sleep and change. We were on the bottom floor so no view. I would stay there again if I needed a room in the kings beach Tahoe city area

DO NOT STAY HERE!

When I saw the picture and description on the website, I thought, "this seems like a good deal". I was so wrong, and we checked out after only one night (too late to switch).

This place is really a motel with rooms stacked on top of one another. It's dated, the front desk closes at 9PM (if there's anyone there at all), and there is no view. The rooms face the water, but the motel is across a busy road with businesses all around it...not exactly the allure of Tahoe. But that's not why I left.

The website advertised a "sleepnumber" bed. WIth a bad back, a comfortable bed is important. I had previously stayed at the nearby Hyatt, and wanted to save a few dollars. What a mistake I made!

When we checked in, it was if I was bothering the young man at the front desk. We entered the tiny, slow elevator to our 6th floor room. It was late, I was tired, so I laid down on the bed. Not only did the "sleepnumber" bed not tilt, but it would not work at all. Back to the front desk to see the young man. He came up to the room, but could not fix it. So, I plugged in my cellphone to charge it, and the outlets were so old that the plug just fell out of the wall!

By the way, the rooms are "way nicer" than the pool, which is an empty puddle of dirty water. It's been drained for the season, and no one seemed to mention that either. Just another surprise at this dump.

I got up the next morning to check out one day early. I jumped in the shower (oh yeah, it's a hot tub that doubles as a shower (you'd have to see it to believe it!). In order to take a shower, you climb over the edge of a giant hot tub in the bathroom. Wow.

I went to the front desk, but no one was there. The door was open, but noone to be found. Bizarre. After loading the car, I returned to the front desk, and someone was finally there. I told the young lady that we were checking out early, and asked about a refund for the second night. She said I'd have to "email Billy". Well Billy could give a crap about getting back to you, or dealing with your issues. They have your money, and you're hosed. No phone call, just an email with their fine print. And the oldest person on duty/on sight is someone fresh out of high school, with absolutely zero authority to do anything.

I've stayed in some pretty shabby places, and this one certainly makes the list. It's like a scene out of National Lampoon's Vacation. It's a tourist trap, and I could only recommend it to someone that is in desparate straits for a place to sleep. And under no circumstances pay for any nights until you see the room!

The Village At Squaw Valley 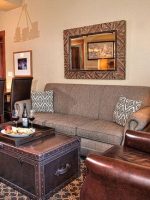 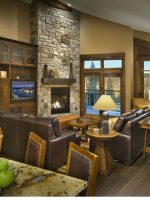 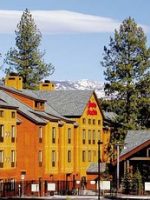 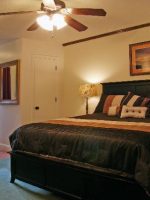 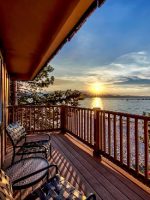