The Cottages at the Boat Basin
2176 Reviews
Edit

Cottages built right onto the wharf affording harbor views are in high demand, and these 29 cottages and lofts come complete with kitchens to make the stay feel more like a cottage rental. Select from studio or one- to three-bedroom cottages, as well as studio or one- to three-bedroom lofts, many of which include balconies or terraces. Pets are welcome in specially designated Woof Cottages. The cottages are open April through October and weekends November and December (closed January through March).

You will Not get the room you think you have booked!

We wanted a room with a king bed and I think we were paying for one with a charge of $312. When we arrived we were given a room with a queen bed and a charge of $229. I wanted the king bed.
Our room had no place to put the luggage except for on the floor. There was nothing like a luggage rack or dresser. There was no where to hang our jackets and clothes. They went on the floor.
The bathroom was the smallest we have ever seen. It had a tiny hallway to the toilet which was maybe 18 inches wide. The toilet was the lowest I have seen in many years-probably since kindergarten. The sink was a corner sink that was very old and just above the knees. You have to bend over to use it. Again-for 5 year olds?
A slat in the window blinds was broken at eye level in the bedroom so we were exposed to any one passing by. We managed to "hang" a jacket on the window to cover to exposure.

We hated this place.

The Cashelot Cottage (2BR) at the Cottages at Nantucket Boat Basin

We were excited to stay in town at these adorable cottages at the Boat Basin. Perfect location! I spent some time on the phone with the reservations choosing the right 2 BR Cottage. I was given 3 options. (Falcon, Cashelot and not sure of the 3rd but was told it was next door to the Hyline ticket counter so ruled that one out immediately) From what I was told, I chose the Falcon (a few cottages away from reservations deck and also have a front deck facing the wharf). When we checked in, we were thrilled to get in "earlier" than check in. I mentioned we booked the Falcon but they said it was booked already for the next few days and that they had us in the Cashelet (I didnt explain at first bc was excited to get in and the only real difference from what I was told is that the Falcon has slighly less room but had the front balcony). The minute we walked into the Cashelot Cottage, we were disappointed. The first floor is tiny. The bathroom (you will see attached photos) was disgusting. We were told that they apologized that we did not have a front balcony but there was a "rear" balcony. We went out back and there was ONE chair that was so worn out that we were afraid to sit in it as well as afraid to stand on the balcony for fear they would fall apart. The bathroom in the cottage was TINY and DIRTY. (see attached photos) We had to call front desk 4 different times to fix the toilet. The shower was so small that if you bent over to wash your legs or feet, your butt would open the door! There was only 1 TV (upstairs). The 2nd bedroom was so small and tight (no closet) that they door could not close if the trundle bed was in use . Since there was no closet, the luggage had to be put into the hallway. Overall, we felt like we were totally duped by White Elephant. We tried for 2 days to rent another room or bigger better cottage, but there was nothing available. We're shocked that the White Elephant puts their name on this product. For more than $1k/night, they should be ashamed. I STRONGLY suggested NEVER staying here. 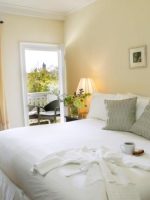 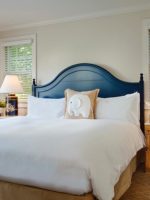 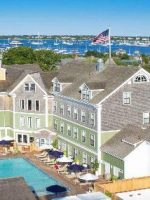 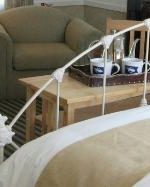 The Wauwinet: An Inn by the Sea 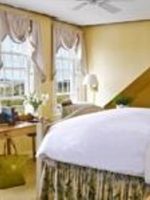 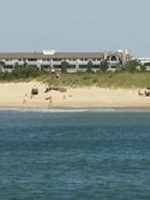