The 91 rooms and villas at this beautiful Langkawi property close to the Kilim Karst Geoforest Park include three-bedroom family villas with private pools and stand-alone one bedroom beachfront villas. There’s a kids’ program for ages 4 to 12, and fun family activities offered include monkey safaris, rainforest safaris, beach barbecues and rock climbing. There’s even a special archery program for teens.

This hotel has been the highlight of my honeymoon! I couldn't even begin to say how thankful I am for the service given by all the staff of this resort! If i could keep coming to one hotel for the rest of my life, the four seasons langkawi would be the one for sure! Their kindness and helpfulness is something i have appreciated greatly despite my short stay.

First of all, the hotel is breathtaking in views, in decor and in architecture! We had the best view from our beach villa and a portion of the beach to us only!
The food is just out of this world! Breakfast, lunch and dinner are so tasty! You could eat your fingers!
The rooms were simply wonderful! Amazing welcome amenities & bed decoration and rooms are so clean and super spacious too! The outdoor shower, the private pool and massage room were real plus!
The service i have had there is the perfect example of what true hospitality is and how guests should always be treated. Thank you so much to F&B team, the nursing and Front Office team.

Be sure to try the lobster dinner on the beach if you are there as a couple, it's so worth it!

A million thanks to everyone who contributed for making this honeymoon so memorable! This is a stay worth every penny we paid for! Four Seasons Resort, you made Langkawi special for us!

We had a fantastic long weekend at Four Seasons Langkawi. Very private, quiet location that is a combination of ‘jungle’ and a lovely wide beach. The resort felt somewhat like the Four Seasons Chaing Mai, except on a beach rather than rice paddies.

The breakfast buffet was fabulous, and they were so helpful explaining and exposing us to the local food. Narishah took great care of us each morning, After telling them at the first meal we ate at the resort that my husband has celiac, we never had to mention it again. Each time we ate, regardless of the restaurant, the staff all knew and made it easy for him to eat gluten free.

Evenings we started in Rhu Bar which is positioned perfectly to watch the sunset. Mario was a pleasure to talk to and provided attentive service and fabulous complimentary tasty appetizer and dessert bites.

We ended up eating 2 of the 3 nights in the signature restaurant, Ikan Ikan. It is a lovely traditional setting/. We hadn’t originally planned to eat there twice, but between the fabulous food and the service from Shin Yan and Firdaus we had to go back a second time. Much to our surprise and delight, when we were checking out of the hotel early the next morning there was a personalized gift from Shin Yan, Firdaus and the Chefs with several of the Ikan Ikan recipes! Then as another little present, the executive chef Sandeep emailed us their gluten free bread recipe a few weeks after we left!

For excursions we did a Friday evening cycle to a local market. It was truly a “local” experience, not one of those markets full of tourists, in fact I’m confident we were the only tourists. Our guide, Hazaid (I think was his name) was fun and great at explaining the local food and sharing stories about his family and customs. We normally don’t eat street food, so we don’t risk stomach issues, but I did try the crispy Malay pancake (Apam Balik) that had nuts and creamed corn. It was a delicious sweet treat.

We also did the guided mangrove and eagle safari. The information that our guide Jack provided was fascinating. We have done other mangrove tours in other countries, but have never learned as much as we did about the whole ecosystem of mangroves. One of the highlights of our safari was a stop at a fish farm, where an impressive 12 year old local boy named Adam gave us a fabulous tour.

The resort itself was very nice, Their was an infinity edge adult pool overlooking the ocean, with private cabanas almost built into the pool. We also walked around the family pool and it seemed like it would be a nice pool for kids, lots of different levels and features giving it some interest. We had no issues with the concrete plant that you could barely discern in the distance (we had actually been advised against the resort for this reason, but thankfully we didn’t listen to the advice!). The only slight negatives were a few maintenance issues that weren’t quite up to the Four Seasons standard we are accustomed to (some flaking paint and stained caulk in the bathroom, some limestone tiles in the adult pool that were somewhat disintegrating, and dusty areas in some of the beautiful wooden lattice work in the closets). Despite those minor issues, the housekeeping staff tended to the room perfectly, even cleaning up after some monkeys got into our games on our deck.

Overall, we would definitely recommend a stay both for the lovely resort and the people working there. 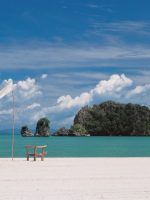 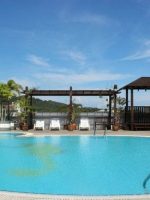 The Andaman, A Luxury Collection Resort 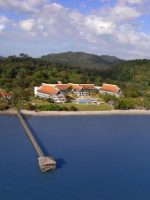 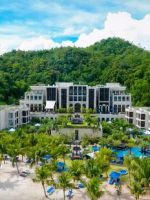