One & Only Palmilla
2176 Reviews
Edit

This is the kind of resort where even the gatekeeper knows to say “Welcome back” when our taxi approaches, noting that we stayed at the property five years ago. At the entry, a bellman whisks luggage to the room while a greeter proffers guava, strawberry or raspberry frozen ices. Before a staff member escorts guests to accommodations, he unfurls a white parasol to provide sun protection for the journey. There’s also no need to line up at the front desk since registration happens in the guestroom.

Then the butler arrives. Even though we share him with several other lodgings, we remain impressed as he acquaints us with the room, pointing out the telescope for star viewing, the Bose CD player and the complimentary tequila.

Such service and details matter at this AAA Four Diamond beachfront resort, located within the 21-mile Los Cabos corridor between Cabo San Lucas and San Jose del Cabo. The rich and famous have visited the resort since its inception. Don Abelardo Rodriguez, a flight instructor and test pilot for the U.S. Air Force during WWII, purchased Punta Palmilla, constructed 15 rooms, the chapel and an air strip, and opened the resort in March 1956. Guests could arrive only by plane or by boat because the Transpeninsular Highway wasn’t built until 1970. The isolated location and the area’s natural beauty made the resort an A-list magnet. The property drew luminaries such as John Wayne, Bing Crosby, Lucille Ball and Desi Arnaz, as well as Ernest Hemingway, who was attracted to Cabos’ deep-sea fishing.

The hotel was sold over the years to various businesses. In January 2004 the resort reopened after a $90 million refurbishment and a rebranding as part of Kerzner International’s One&Only upmarket portfolio. As part of the debut sparkle, John Travolta brought his friends to celebrate his 50th birthday at the resort. Natalie Cole crooned “Unforgettable,” and Jose Feliciano sang “Light My Fire,” cueing an elaborate fireworks display.

Channel your “inner celebrity” and prepare to be coddled at this luxury resort, which has 173 mostly oversized rooms and suites, 27 holes of golf, plus a world-class spa. In 2008, a $30 million renovation added 16 beachfront suites, a four-bedroom villa, and Market, the first west coast venue by Michelin starred chef Jean-Georges Vongerichten.

The hotel looks wonderful. The grounds bloom with hibiscus, bougainvillea, oleander and scores of other flowers. Bamboo and palm trees shade the walkways, giving the resort the lushness of a desert oasis. Families with children ages four to 10 are likely to be happiest at this resort because of the children’s program.

Most of the guestrooms are oversized and all come with surprises, the first of which is the butler, who points out the complimentary tequila, the telescope for stargazing and the terrace with an inviting daybed. The butler also assures that you receive your preferred daily cocktail, snack and fruit. We call the room decor "Mexican hacienda gone elegant." The Spanish style, high wooden border frames an embroidered fabric that forms the headboard, a Spanish style chest conceals the coffee maker and the white wooden doors in the room have iron inlay. Most rooms come with a sitting area and couch and all rooms feature some type of water view. Two children under 12 stay free and cribs and rollaways are complimentary.

Guestrooms
All of the guestrooms feature sea views from the private patio or terrace. The units in the Tres Palmes building, among the smallest and least expensive, are close to a green lawn for playing, the family pool and near the swimmable beach.

Suites
There are a variety of suites from with to choose and each has a small private pool. The master pool casita, along with a dining and living area, comes with a bigger pool and an outside shower.

Villas
The large four-bedroom villa offers beautiful, indoor and outdoor spaces. It can accommodate up to eight adults and two children. It features a private infinity pool and fitness suite, a home theater and home office and a fully equipped kitchen.

Just got back from honeymoon at Palmilla. Stayed for 6 nights in a junior suite. Everything is beyond amazing. The attention to detail like landscaping, grounds, pool, scenery, room, shower, etc. was inspiring. My wife says that if you don't love Palmilla, you need to have your head examined. Yes, everything at the hotel is expensive, but it is the best. If you are on a budget or don't care about the best, or don't appreciate top food & service, don't stay here. I'm not judging, just saying.

Tip- Uber is now available. It's way cheaper than taxis, but the cars are tiny and only hold up to 3 riders. We took taxis everywhere for days before finding out about Uber. It works on your phone app, exactly the same as U.S. A taxi to San Jose was $20 and we took Uber back for $2. The savings is huge.

We saw a few families, but in my opinion, this is not a family resort. It's quiet and expensive.

Location, architecture, service, ambiance, food, experience is 100%. This is one of our top 3 resorts in the world. Cabo San Lucas has become a 5 star location for boutiques in the world. Palmilla is number one!

Beach and Pool
Located on a peninsula, the One & Only Palmilla's grounds front both the rough waters of the Sea of Cortez and the calmer San Jose Bay's Playa Palmilla, one of the more swimmable beaches in Los Cabos. Depending on the season, the waters may not be the safest place to swim. Pools remain the safest places to swim in Los Cabos, especially for children. Aqua, the family pool, begins with a cleverly designed stone children's area that trickles, stream-like, toward the bigger pool. The resort keeps a stash of water toys nearby and the chaise lounges offer plenty of shade .

Kids' Club
At the resort's complimentary Kids Only program, ages four to 11 go on treasure hunts, bake cookies, build sand castles, paint ceramic tiles, make and smash pinatas and go on lizard hunts. In high season the program operates from 9 a.m. to 9 p.m. and in off-season, the program operates from 9 a.m. to 5 p.m. As part of the Kids Only Club, or as a separate outing, your children can try a golf lesson with a pro; sign up 24 hours in advance.

Family Activities
You can stretch out at family yoga sessions and challenge each other to rounds of Nintendo Wii. Your butler can outfit your room with a complimentary unit. Despite these offerings, 'tweens and teens may get bored at this resort unless they are kept busy exploring Los Cabos on soft adventure outings or playing golf on Palmilla's course.

Breeze
Open-air Breeze, the most kid-friendly of Palmilla's restaurants, serves breakfast, lunch and light afternoon snacks. Although the cafe overlooking the Vista pool and the ocean, does not offer a children's menu, the restaurant serves ample portions that parents can share with their kids. The grilled fish tacos are wonderful, albeit pricey for lunch.

La Fonda
La Fonda, a Mexican dinner held every Tuesday night on the terrace in front of the chapel, is fun for families. Dine on quesadillas and other Mexican fare while listening to guitar players. Local artisans showcase their silver and pottery too. Often the evening ends with star gazing.

Seared
This steakhouse and seafood restaurant is overseen by noted chef Jean-Georges Vongerichten. Fresh local ingredients as well as traditional Mexican staples and recipes are added to Vongerichten's characteristic Asian herbs and spices.

Suviche and Aqua
Teens as well as adults may like Suviche Restaurant and Lounge. Suviche serves both sushi and Mexican ceviches as well as teas and sakes. Agua, the resort's other restaurant serves what it calls "Mexiterranean" fare, a mix of Mexican and Mediterranean.

All About the Extras
For infants, you can pre-order sheets for cribs, plush toys, and mobiles as well as baby shampoos and lotions. At turn-down, you can have cartoon characters read bedtime stories over night-time milk and cookies.

Nanny service is available for a fee.

You don't have to endure plane food on your way home. With two nights' notice, the resort will prepare sandwiches, fruit plate, drinks and other items from their Air to Go menu. The goodies come packed in a cooler.

The Art of Smart Timing
High season for Palmilla resort runs from mid-October through mid-June. Low season, when rates can be lower, is from mid-June to mid-October. In March and April college students on spring break flood Los Cabos, but it's not likely they would book the resort - too pricey and too "staid." Summers can be brutally hot.

Getting There
Many airlines serve the SJD Los Cabos International Airport.

Getting Around
If not renting a car, then book your transfers from the airport when you book your lodging reservation or at least 48 hours before your departure as recommended by the tourist board. With a pre-arranged pick-up, you avoid dealing with the many people in and out of the terminal soliciting you to ride with them.

Getting around Los Cabos is easy. Many hotels offer complimentary shuttle service from their properties to Cabo San Lucas and your hotel can call a reliable taxi for you.

For Mom and Dad
For parents interested in renewing vows, this time with the children present, Palmilla has a hilltop Mexican-style chapel.

When your children are in the kids' program, lounge at the adult Vista pool and enjoy a complimentary foot massage by the pool attendants.

Spa
Get pampered at the spa by opting for one of the 90-minute rituals. Many of these begin with a foot wash in the spa garden and end with a relaxing soak in a Jacuzzi tub in a private garden nook. Young people 12 and older can enjoy a make-up lesson, mini-facial or a hand and leg massage in their room when a parent is present. 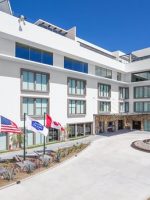 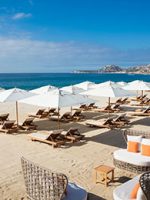 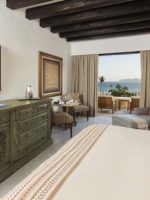 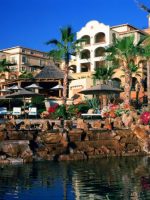 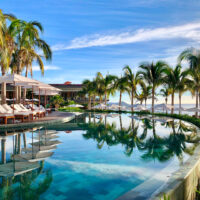