For a long time, downtown Los Angeles has languished under a bad reputation as being a wasteland of office buildings, shunned by tourists in favor of sexier neighborhoods like West Hollywood and Santa Monica. In the past few years, however, the area has undergone a renaissance of culture, with the construction of Disney Hall, the Museum of Contemporary Art Los Angeles, and most recently, The Broad Museum; slowly but surely, the neighborhood has come alive with new upscale restaurants and hotels. Riding the wave of this resurgence, the Omni Los Angeles provides the perfect centrally located home base from which to explore the city.

Everything about this hotel exudes luxury, right down to the silhouettes of women and men in evening wear in place of the usual cut-outs of ladies and gentlemen on the bathroom doors. All of the dÃ©cor is done in a classy, elegant, and understated style of beige, grey and slate. In fact, in some ways, it seems like the kind of place where you’d want to bring the CEO of a firm you were trying to merge with rather than your family on vacation.

That said, the Omni Los Angeles upholds high levels of luxury and service a cut above an ordinary chain, along with a number of features that make it very comfortable for families with kids. Rooms are large and plush, with views of downtown, and come equipped with large TVs and bathtubs. Some even allow pets to stay for an additional fee. Kids, meanwhile, are treated to special touches including a backpack of activities upon check-in and cookies and milk upon turndown. The hotel also has an outdoor pool along with a comfortable patio area to soak up the California sun, and an attached shopping mall with stores catering to travelers.

Not everything about downtown has gone upscale — after all, the hotel is located only a few blocks from a neighborhood literally called Skid Row. Still, for the convenience of being across the street from museums, and for its high standards of luxury, the Omni Los Angeles is an exquisite beacon for what central Los Angeles is becoming.

Deluxe Rooms
The standard-size rooms at the Omni Los Angeles are just under 400 square feet, done up in a classy color scheme of slate blue and bronze, with polished wood and understated contemporary art. They include a choice of a king, two doubles, or two queen beds with headboards inlaid with mother of pearl. Bathrooms are a good size, and include marble tiles and a granite vanity, with a stand up shower and small bathtub.

Other amenities include a large flat-screen TV, iron, hair dryer, lighted makeup mirror, and nice touches like extra outlets in the nightstands. These rooms also include a small desk with padded leather desk chair. The mini-bar is customizable with advance notice.

Club Rooms
Identical to Deluxe rooms in terms of size and amenities, these rooms include breakfast, as well as a complimentary cocktails and hor d'oeuvres nightly in a special club lounge.

Premier View Rooms
Again, identical to Deluxe rooms, these accommodations are located on upper floors with spectacular views of Disney Hall and the Broad Museum, framed by the surrounding San Gabriel Mountains.

Premier Rooms
Designed for business travelers, these rooms are slightly larger than standard rooms, and include a personal fax/copier/printer. They also have a separate sitting area with couch in addition to a king-size bed.

Executive Suites
Twice the size of standard rooms, these suites include a large sitting area with couch and cushioned arm chairs, along with an extra bed that folds down from the wall. The bathroom is also substantially larger, with a marble vanity and spacious bathtub.

California Suites
The hotel's three suites are three times the size of regular rooms, with a separate bedroom with its own whirlpool tub. They also include a living room, dining table and wet bar, along with the option of connecting a second bedroom.

Presidential Suite
The ultimate in luxury, the hotel's prime suite is nearly 3,000 square feet of living area, including a large bedroom, living room, dining room, and "powder room." The bathroom is also spacious and well-appointed with a marble vanity and large bathtub. A second bedroom can also be connected.

We stayed here while visiting my daughter in L.A. Location was great, staff very friendly and helpful, and the room was impeccably clean! We had one small issue with a mini fridge that they sent up that didn’t work, but staff was very apologetic and fixed the problem at once. I would definitely recommend this hotel!

This was our second weekend stay at the Omni Los Angeles at California Plaza. We originally reserved a club level room, but with Black Status we received an upgrade to a spacious suite in addition to the club level access. The suite was lavish with a great seating area, and the club level had generous amenities including bar, evening appetizers, and breakfast. The overall hotel was well maintained and staff were professional including valet, front desk, and house keeping. We'd like to give special thanks to the young lady who worked in the club level that Saturday evening and Sunday morning in early October -- she was very friendly and did a fantastic job keeping everything in order! We live in LA, and plan on staying at this hotel again for future weekend getaways!

Pools
The Omni LA's heated rooftop pool provides an urban oasis looking down on the buildings of downtown LA. The pool is about 15 feet by 40 feet, and a uniform depth of 3 Â½ feet, with lanes for lap swimming. Around the pool are situated a number of comfortable reclining pool chairs, with umbrellas to block out hot So Cal sun. There is also a separate lounge area with padded couches along with a few scraggly palm trees fire pits that are lit at night.

Omni Sensational Kids
The Omni Los Angeles doesn't have a kids' program, but it does provide a backpack full of snacks, games, and a coloring book for each child upon check in. The hotel also surprises its smallest guests with a delivery of milk and cookies to their room on the first night of their stay.

Grand CafÃ©
A grand salon in the French style, this cafÃ© offers sophisticated dining in a casual setting with an emphasis on fresh California cuisine.

Breakfast is an adventure in and of itself, with an extensive arrange of entrees from Belgian waffles to an "L.A. Scramble" (avocado, bacon, cage-free eggs and locally made chili aioli), as well as a dozen a la carte choices. The piece de resistance, however, is the gargantuan breakfast buffet, with made-to-order omelet and waffle stations, several different types of housemade sausage, meats, cheeses, eggs, and an "only in L.A." artisanal bread and butter bar.

Lunch does its best to hold its own, with an array of a dozen salad choices, including watermelon, Mexican, and BBQ grilled chicken offerings, as well as a full range of creative sandwiches and burgers. There are also some more substantial entrees on offer, including cracked pepper steak, local seabass, and a stir-fry with oyster sauce. Of course, there is also a children's menu on offer, with spaghetti, grilled cheese sandwiches, and both fried and grilled chicken fingers.

NoÃ©
Breaking from the staid atmosphere in the rest of the hotel, this romantic restaurant is sleek and sexy, with iridescent gold and ultramarine accents on the walls. The food is similarly playful with top-shelf chef John Paul-Kuhn mixing and matching classic French dishes with Japanese, Caribbean, and Spanish flavors. Seafood also features prominently on the menu, with a shellfish bouillabaisse among diners' favorites. Of course, there is also an emphasis on farm-to-table cooking, with the menu changing seasonally according to what's coming in from the fields.

The restaurant is open from 5 until 10 p.m. on Sunday through Thursday, and until 11 p.m. on Fridays and Saturdays. A baby grand piano provides dinner music Monday through Saturday. An adjoining lounge area features several banquettes arranged around a gas fireplace, and a black marble bar that serves up cocktails, wine, and local craft beers into the night.

Morsels
A grab-and-go cafÃ© counter in the hallway between the restaurant and the cafÃ© offers Peet's Coffee, as well as bagels and bakery items.

Room Service
The hotel has a comprehensive 24-hour room service menu, featuring sandwiches, burgers, and pizzas, along with a range of breakfast items in the morning, and selections from Noe in the evenings.

All About the Extras
Wi-Fi
Wi-Fi is available for a fee of $10 per night, or $15 for high-speed access. Tip: Sign up for Omni's rewards program -- it's free -- and you'll enjoy complimentary Wi-Fi.

Fitness Center
The hotel has a large fitness center, with a full range of treadmills, free weights, stationary bikes, and machines. You must be 18 to exercise unless accompanied by an adult.

The Art of Smart Timing
Los Angeles has warm, sunny weather year-round, but there is more seasonal variation than one might think. The most pleasant times to visit are in spring and fall, when days are warm, but not overly hot, and crowds are at a minimum. Summers are popular -- and crowded -- and can become unpleasant downtown due to smog (though it is not as bad as it once was.) During winter months, the weather is still nice, though it gets rainy at times. Crowds are at their lowest at this time, so it's possible to find deals. The Omni Los Angeles is also a popular hotel for business travelers, so it's possible to find deals on the weekends when the hotel is less crowded.

Getting There
The Los Angeles International Airport is one of the country's busiest, with regular flights from all major airlines. Los Angeles' Metro Rail service runs from the airport downtown -- the closest stop is the Civic Center station on the Red Line, and the trip takes about 30 minutes. A taxi also takes about 30 minutes to drive downtown up Interstate 110. Fares will set you back about $55 with tip.

Given Angelenos' reliance on their freeways to get around, it's highly recommended to rent a car if you plan on doing any sightseeing outside of the downtown core. Keep in mind, however, that the Omni's valet parking prices are steep -- nearly $50 a night. Other parking garages downtown are cheaper; a few blocks away at the Pershing Square Garage, for example, rates are only $16 per night.

Getting Around
Everything you've heard about Los Angeles freeways is true -- the city is sprawling and commuting between tourist attractions means getting on one of the elevated freeways and fighting the thousands of other people doing the same thing. See it as a rite of passage, or as part of the Los Angeles experience, but leave extra time to travel wherever it is you are going.

Alternatively, you can take the Metro Rail service, which is relatively young for U.S. subway systems, only having opened in 1990. It doesn't cover the whole city (at least not yet), but it's expanding all of the time, and many tourist destinations, including Hollywood, are easily accessible by train. The system generally gets good marks for being clean and efficient, with few delays. Many notable sites, however, are not accessible by Metro, including Beverly Hills, Santa Monica, and Venice Beach. Trans run until 1 a.m. and until 2 a.m. on Saturdays, but can get sketchy at night. Later than 11 p.m., it may be better to take a cab.

For Mom and Dad
The hotel has a small, but inviting spa, with an extensive menu of options. Treatments include hot stone and shiatsu massages, facials, aromatic seaweed wraps, and integrative treatments, such as craniosacral and energy work. 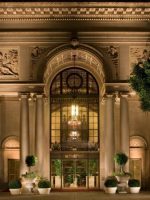 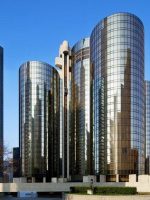 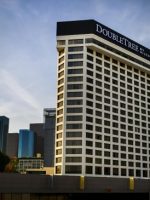 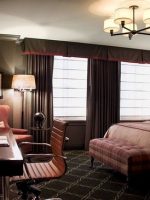 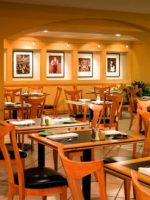 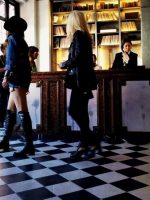